What is National Flip Flop Day?

Tenn Yuk Orthodonics is so proud to be a part of such a wonderful organization.  Tropical Smoothie’s efforts and the work they do makes a real difference in the lives of the children and families that attend Camp Sunshine.

Within the beautiful grounds of Camp Sunshine off Lake Sebago in Casco, Maine, children and their families are invited to make magical memories together, surrounded by professionals dedicated to giving them the emotional and medical support they need.  In fact, they are the only organization in the nation committed to addressing the effects of a life-threatening illness on not only the child who is ill, but the entire family.

Each year, Camp Sunshine, offers countless families the opportunity to put aside the stress and severity of having a child with an illness and just have fun.  It costs $2500 to send one family to camp for a week, but thanks to the compassion of people like you, these families are able to attend completely free of charge. 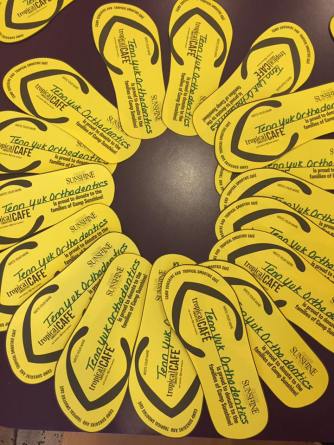 Tenn Yuk Orthodontics encourages everyone to Join Us on June 17 at Tropical Smoothie for National Flip Flop Day. Wear your flip flops, enjoy a FREE Jetty Punch Smoothie, and help send a family to Camp Sunshine!

The Story Behind Flip Flops

The name “flip flop” comes specifically from the sound the sandals make when they slap between the sole of your foot and the floor.

This particular type of sandal originates as early as the Ancient Egyptians in 4000 BC, and the oldest known pair is on display at the British Museum from 1500 BC.  This pair is made from papyrus, but just as a huge variety of cultures have worn these sandals through the years, they’ve used a great variety of materials.

Papyrus and palm leaves were the most common materials used in Ancient Egypt, whil rawhide was the material of choice among the Masai of Africa. In India, these sandals were mostly made with wood, and many used rice straw in China and Japan. In modern times, most cultures have moved to leather,rubber and other sturdier textiles.

What we know of as the modern flip flop gained popularity in the United States after the end of World War II, when soldiers brought them back from Japan. During the postwar boom, Americans started to design flip flops in new bright colors and patterns, wearing them for their convenience and comfort. In the 1960’s, they became primarily known as a part of the casual beach lifestyle of our Beloved South Florida and California.

Flip flops are a popular choice among people of all ages, typically worn in casual settings. Younger generations tend to feel its okay to wear them to formal events too and we’ve seen some pretty stylish (and bedazzled) styles that can definitely be considered “dressed up”.

Whether you’re wearing a pair of classic rubber flops or a leather pair with pretty detailing, you know the necessity of these sandals for every individual’s wardrobe.